How to Keep What God Has Given You

Today is my final post in a series about abiding in the Spirit of God, as revealed to us in the fruit of the Spirit. By clicking these links, you can read parts one, two and three.

In the Kingdom, everything we can receive from God is meant to be given away.

As we learn the process of how to be transformed, we understand the key principle in becoming: Whatever we experience in Christ is established in us as we release it to others. Keep something to ourselves and it dissipates over time. If you constantly give it away, it flows back in greater measure (Luke 6:38).

That fascinates me on a relational level. Liberating others with what God has given me actually increases the gift in me and produces another upgrade to give away.

In the past, I took all my emotional cues from what was happening in my circumstances or from the attitudes of the world around me, rather than the Kingdom within. Believe me, it did not work. I’m sure it was a relief to everyone as I began to learn that my reality came from the internal Christ.

Because God is allocating His nature towards me constantly, I can be proactive in how I relate to people rather than just going from reaction to reaction. You and I can allocate God’s nature in advance!

There have been many times when I have gone into situations with a guarded, pessimistic, negative, hostile, offense-minded, pugnacious approach. A “don’t let them beat you down” or a “make sure you have your say” kind of attitude. The result of that approach was then pre-programmed by my disposition. I reaped what I sowed.

But when I take the time to allocate the fruit of the Spirit to people beforehand, I can bring them into a blessed state so that they can receive God’s presence and hear His voice regardless of circumstances.

The Holy Spirit is a genius at life and He is in charge of every process. Praying with Him in this regard has wonderfully stripped me of every other motivation except goodness. I am clean in my intentions and practice.

Here’s a more personal story of how the Lord turned around a nightmarish chapter of my life and empowered me to bring healing to the person concerned, and also huge growth upgrades for myself. It’s kind of poignant but pretty funny. I hope it speaks to you.

Lionel was a source of intense annoyance to me. He aggravated me. Long story cut short, he was convinced that his ministry was to be my mentor. He was sent to guide and disciple me into fullness and abundance. My problem was that he used all my material to do it! He laid hands on me and prayed publicly using crafted prayers I had shared with a group whom I was teaching to pray. Urghh! I was teaching a class on “The Prophecy of Scripture,” how God gives us life verses from the Bible to shape our calling and destiny. I shared some personal scriptures that had been incredibly vital. He took those verses and gave me faux prophetic words in meetings. Grr! He let anyone who would listen know that he was my mentor.

Each time I would meet him he would snap his fingers at me, raise his voice and begin instructing me on what God wanted me to know using excerpts from my CD’s or books. My aggravation was becoming incandescent.

Weeks later I heard the Lord gently say, “You know, Graham, for where I want to take you you’re going to need a lot more patience.” Cryptic. Obscure. Mysterious. Hidden meaning. It nagged at me. A few weeks later I received a more obvious message. Apparently irony does not work on me. “You know Gra, you and Lionel both need the same thing.”

The sky fell on me just about the same time as the trap door opened beneath my feet. I may have spoken in tongues in a language God never gave me. It’s really hard being mad at a divine being who is doubled over in mirth.

There are times God laughs with me and other times He laughs at me. Either way He makes me smile. His joy is deeply infectious.

My outrage at His comment simply could not be sustained. I grumpily began to consider the idea of learning patience with Lionel attached to my hip. Here’s the thing, if God wants you to learn something, do something or become something get joyful about it. Joy is a powerful anesthetic.

I began allocating patience to Lionel. He became hugely encouraged. Apparently, his ministry was working. Emboldened, he spread his mentoring prowess to other areas of my life. I put away childish things and turned to the Holy Spirit. I increased my output. To the gatherings we attended together I allocated patience several days in advance. He liked to sit on the left side of the auditorium on the first row of seats. I laid hands on every chair. He moved to the right of the sanctuary. I blessed him in that place. He sat in the back row. My allocation of patience towards him was more situational than heartfelt, I began to realize. I had to get real with God or neither of us would grow up. I didn’t want to be patient with Lionel; I wanted to make him patient. Preferably with a sore throat.

Nothing works against the fruit of the Spirit. I let my heart go there with the Lord. I realized that I was using my patience more as a shield to protect myself from Lionel rather than as a part of God’s favor with which to bless him.

When you know what the Father wants you to be for someone, what they are doing loses its power.

I became more consciously sensitive to how God loved this man. As I become more patient he became less irritating and our conversations improved but there was no breakthrough. I needed to love Lionel for Jesus’ sake, not see him as my patience project. There is no stopwatch on change. I let time go.

Months later I was walking down the street and I heard God say, “Put your patience ahead of you.” “What!” I blurted out, “How do I do that?” When you breathe out, you push air into the space in front of you” He said. “Do that with patience. It’s in your spirit, speak it out!” I mumbled patience into being. He laughed. I forget sometimes just how much He loves me. His enthusiasm for what I’m learning means so much to me. I hurled patience before me for several minutes. “Why am I doing this on the street?” I asked Him. “Because Lionel is around the corner,” He replied.

It was the way He said Lionel’s name that touched me. So much love. I redoubled my efforts. Walking around the corner I saw Lionel about 60 meters away. He saw me, shouted and snapped his fingers in my direction. I allocated more patience to the decreasing space between us. Suddenly he stopped as though he had walked into something. When I reached him he looked bewildered, shaking his head. “Are you OK?” I asked.

With tears in his eyes, he said (condensed version), “I don’t have a ministry. My brothers (siblings) are all more clever than me. I need approval. I have no friends.”

I prayed for him and something changed. Over the next few months his ministry towards me diminished. Six months later he got a new job in a different city. A result that I think occurred because God’s presence had built up in him to a point where Lionel could pull down favor.

The fruit of the Spirit changes the environment around people and the atmosphere within them.

It provokes a climate of faith and changes our relationship with that person. We overcome negativity in ourselves because self-control is always part of that redefining process. Our partnership with God causes His empowering in our life situations as we co-operate with the spirit of breakthrough! 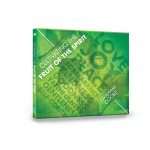 P.S. This is the final post in a series to kick off 2016 about abiding in the Spirit of God and it’s impact on how we carry ourselves in the world. My hope is that this will inspire you to have more presence, more peace and more brilliance in the new year! To explore deeper, be sure to download “Cultivating the Fruit of the Spirit.“